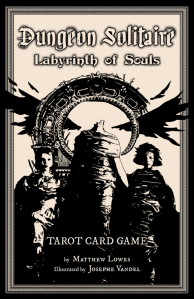 Dungeon Solitaire: Labyrinth of Souls is a fantasy game for tarot cards. Defeat monsters, disarm traps, open door, and navigate mazes as you explore a dangerous dungeon. Collect treasure and magic items, gain skills, and gather companions. But beware, the dungeon is vast, and death awaits those who linger too long. If your torches burn out you will be lost forever in the darkness. If your rations run dry, you will starve or go mad. And dungeon itself is a force of corruption, threatening all who enter. 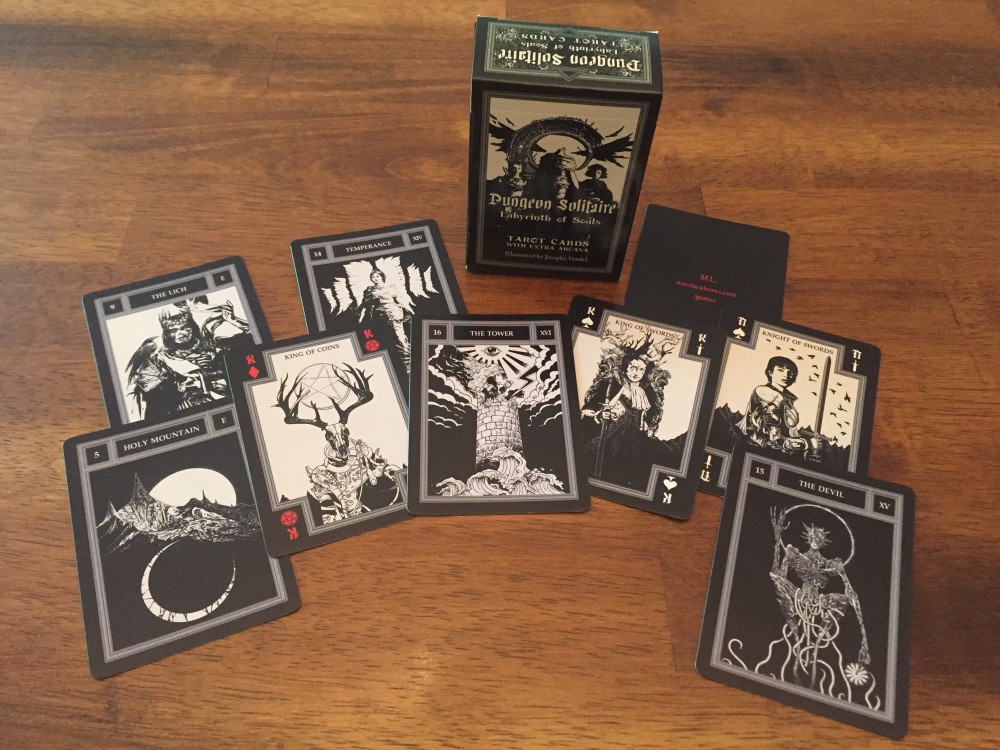 Dungeon Solitaire: Labyrinth of Souls launched with a hugely successful Kickstarter and has inspired it own line of Labyrinth of Souls fiction written by an incredible lineup of veteran and award-winning authors and published by ShadowSpinners Press. 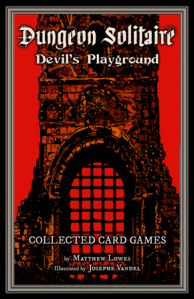 Dungeon Solitaire: Devil’s Playground is a fantasy adventure card game. Fight monstrous diabolisms, overcome obstacles, and endure misfortunes as you delve into the darkest dungeon in a quest to defeat three powerful demons. Along the way you will collect treasure and unique magic items, encounter strange locales, and acquire three divine graces. But beware, the dungeon is deep and even if you survive all immediate dangers, a fate worse than death awaits those who linger too long. You may face starvation and insanity, terrible curses and demonic possession, forever haunted, in the darkness of the pit. 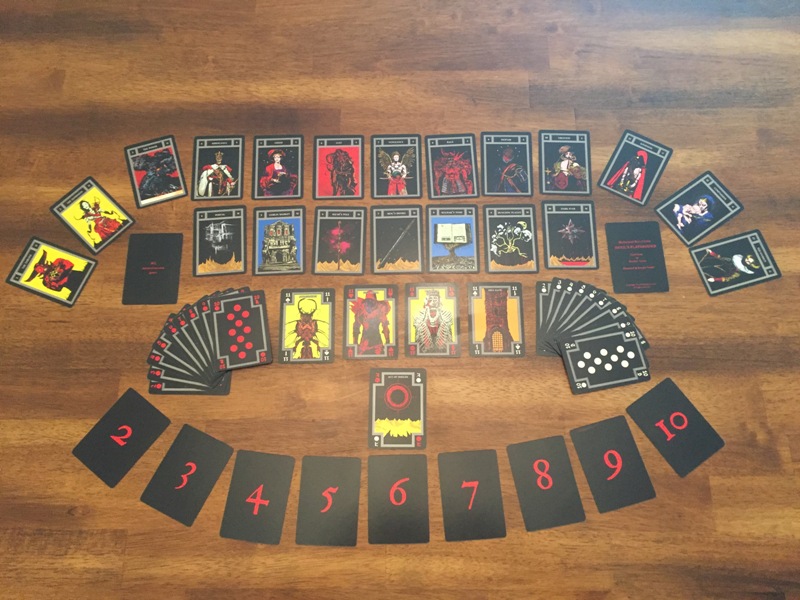 Dungeon Solitaire: Devil’s Playground launched with a big successful Kickstarter and as a followup game contains more games, expansions, and material than any Dungeon Solitaire yet. 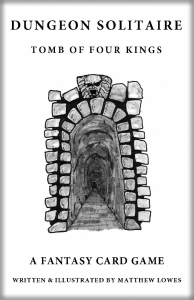 Dungeon Solitaire is a fantasy adventure card game for a single player and standard deck of playing cards. The 12 page rulebook is available as a free pdf download. All you need is a deck of cards. You’ll venture into a vast dungeon in search of the tomb hordes of four legendary kings. Risking death and doom, you’ll slay monsters, bypass traps, and bash in stuck doors, all for fortune and glory! 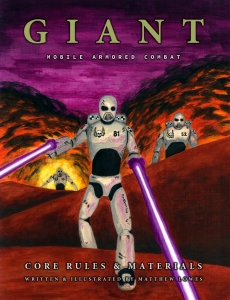 Future wars are waged with huge humanoid machines known as giants. Human pilots are encased in neuro-conductive capsules behind layers of armor plating, their senses and nerve impulses merged with the artificial systems of the giants they control.

Giant is a wargame played with paper, pencils, and six-sided dice. Inside is a complete game, including rules, a visual reference, a record sheet, a master battle map, and eight ready to play maps with various terrain. It’s perfect for travel or when you want an action packed game with minimal preparation.

Each player controls up to three giants, chosen from fifteen different types. Arm them with missiles, guns, and lasers. Then send them into battle!

Once you have the rules, additional pdf downloads make it easy to print and play: 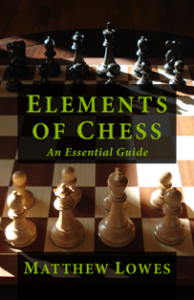 ELEMENTS OF CHESS
An Essential Guide to the Game

Improve your game, your understanding, and your appreciation of chess with this complete, concise guide, specifically designed for beginning to intermediate players.

Elements of Chess is an ideal first chess book and a great reference for more serious students of the game. Chapters cover topics such as tactics, strategy, pieces, and pawns, as well as openings, endgames, and checkmates. Sections on the use of clocks, notation, and commonly misunderstood rules are also included. Every major component of the game is explained clearly and illustrated with carefully chosen diagrams. 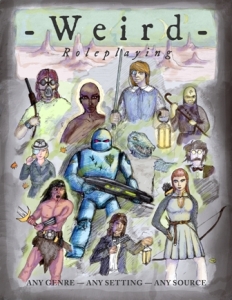 Inspired by weird fiction, stories of adventure, and strange tales throughout the ages, Weird Roleplaying is a rules-light universal system designed for quick character creation, streamlined preparation and gameplay, and easy adaptability to any genre, setting, or source materials.

Equally suited to one-shot adventures and extended campaigns, WEIRD is perfect for cosmic horror, sword and sorcery, science fiction, or modern thrillers. Set your game in a mythic dungeon or a distant planet, medieval Japan or 1920s New England: anywhere your imagination will take you. 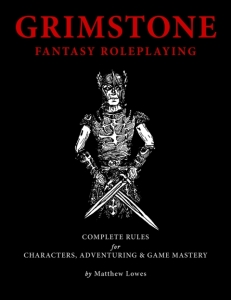 “Many times, the age of dragons has come and gone. Glorious civilizations, rich cultures, and mighty empires have risen, only to fall beneath the reign of fire. A legacy of wealth and magic lies waiting to be found, by adventurers willing to risk everything. Most will die, by the rusted swords of orcs, in the jagged maws of terrible monsters, or from the unnatural influence of dark sorcery. Their corpses will rot in the blistering sun, or lay entombed forever in the Grimstone Deep. But some will find glory. Every age has its pantheon of heroes, and a few of them will rise to legend.”

Grimstone is a complete set of rules for fantasy roleplaying. The core of the game is built around an OSR compatible version of the Original Fantasy Roleplaying Game. However, some aspects of the game have been redesigned or optimized for streamlined preparation and gameplay. Everything you need is here, in a format equally suited to old school and modern styles of gaming. 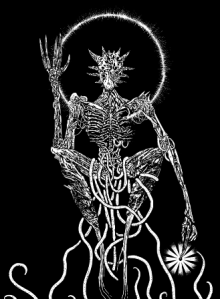 Play all your favorite Dungeon Solitaire games on a computer, tablet, or mobile phone. The Dungeon Solitaire Labyrinth of Souls computer and mobile app will be an electronic version of tarot card game, available across multiple platforms.

A free edition will be available with the basic game only, and a for-purchase edition will include basic, expert, and advanced games, along with some of the variants included in the original rulebook.