I have been practicing Aikido, in one way or another, for 30 years. For all those years, I had one fundamental question about Aikido: What is it? Of course, it’s a martial art, but it’s concerned with much more than fighting, so there’s a lot of mystery and confusion about what exactly it is and why or how to practice. I had many excellent teachers, but I never asked them this question. Somehow I knew that no answer would satisfy me, that I would have to find out for myself. Like many, I went through periods when I had some insights and held this idea or that idea about what Aikido was and how to develop it. And I followed those ideas wherever they led, even when they lead outside the realm of what was being taught in the Aikido dojo, including practicing Systema for fifteen years.

In 2016, I had a sudden, unexpected, and profound spiritual awakening that instantly transformed my perception of reality. I wrote a whole book about that — but let’s just say it was the culmination not just of my training, but of the entire path and circumstances of my life. The clarity that blossoms in the aftermath of such an awakening is beyond imagination. So if I ask myself “What is Aikido?” now, I can answer without reservation. Please take my answer for what it is — a sign post, pointing in the direction I have gone. There is no substitution for practice and experience, and nothing is really realized unless it is realized for oneself. 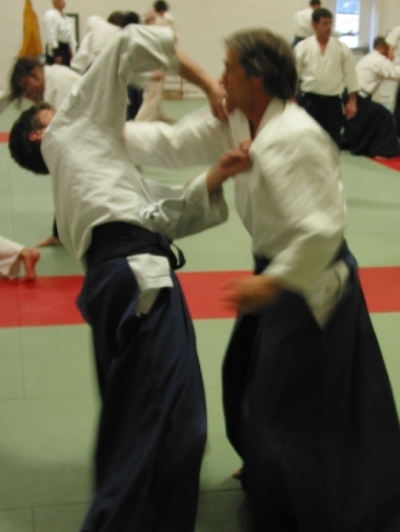 Let me start with this: everything is fundamentally one thing — although it’s not really a thing because there is nothing else. This oneness is always in harmony with itself. There are no real conflicts within it, and there is no outside of it. What’s seen as a conflict at one level, is harmony at a higher level. And since oneness admits no levels at all, both conflicts and levels are illusory. There is just this one great divine harmony, which is reality itself. What is seen as the separate self — the source of all conflict — is nothing but this great divine harmony. And all notions that we are not that, are just more illusory conflicts.

Aikido, as most practitioners know, means harmony-ki-way. This is sometimes interpreted as a way of “harmonizing ki” or “harmonizing with ki.” That’s okay to begin with, but ultimately those ideas will keep you separate and in the realm of illusory conflicts that need harmonizing. Many Aikido practitioners are merely in a struggle to develop subtler and subtler skill or stronger and stronger technique. That’s not bad, but it has no end, and does not in itself lead to great harmony. For as long as you are struggling to harmonize something or with something, you are in fact in the midst of conflict.

Aikido is a practice for realizing what is already eternally harmonious. Morihei Ueshiba, the founder of Aikido, said “I am the universe!” not “I can harmonize with the universe.” Realizing unity removes all separation and instantly reveals total harmony, regardless of skill or events. So in the end, the technical aspects of Aikido are beside the point when it comes to this great realization. That may seem like a disappointment to those seeking mastery, but it doesn’t mean skill has only practical value or none at all. Aikido is a vehicle for inquiry, insight, and realization. As such, we can enjoy it, learn from it, teach with it, and pass it on to others. In time, they may develop skill as well, but more importantly, they may realize the truth within Aikido.

O-sensei’s words, “I am the universe!” are not a boast, nor a metaphor. It is true for everyone, but few realize it. O-sensei had great skill, of course, but his true gift was that he realized the source of his power was not himself. True power can only be realized by surrendering the separate self and all its illusory sources of power. True power is to always be at peace with what is, regardless of circumstances. One who has realized that power — even if beaten or killed — cannot be defeated.