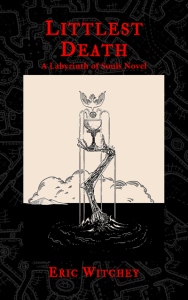 The fourth Labyrinth of Souls novel, “Littlest Death” by Eric Witchey, is available now on Amazon and other online retailers in print and eBook forms. Eric Witchey has sold over 100 short stories and several novels. He has received recognition from New Century Writers, Writers of the Future, Writer’s Digest, The Eric Hoffer Prose Award program, Short Story America, The Irish Aeon Awards, and other organizations. His How-To articles have appeared in The Writer Magazine, Writer’s Digest Magazine, and other print and online magazines.

This is an amazing book! As I got interested in the character of Littlest and the fantastical underworld she inhabits, at some point I realized something was going on that was larger and more significant than I had even imagined. From that point on I could not stop reading. I had to know if the story was going to go as far as it might. And it did not disappoint. It went even further! I wept. I cried. I rejoiced. What a wonderful payoff! The end of the book was like an emotional and intellectual bomb going off. Beautifully set up and so well done!

Here’s the description from the back cover:

One human soul and a little respect isn’t too much to ask for, but both are hard to get if you’ve only been a death for a thousand years. Shunned by other grim reapers, Littlest Death yearns for the respect given to deaths who bring human souls from Overworld into Underworld. She has only been a grim reaper for a thousand years, but she works hard at the jobs she’s given. Really hard! No other death gathers in MILLIONS of souls at a time like she does. Okay, they are just the souls of fungi, bacteria, and single-celled critters like amoebas, but—MILLIONS! If she could bring in just one human soul, the other deaths would stop looking down on her. She sets out to spy on the most accomplished death in the history of dying, Oldest Death. She figures she can learn a few things from him. And, of course, she does. She just doesn’t learn what she thought she would learn, and the learning comes hard. Desperate to become a real death, frustrated by humans and their attachments to one another, hounded by a Hell Puppy, ridiculed by other deaths, and undermined by her own ambition, she journeys the Earth and the Underworld in search of a trick that will let her gain the respect she believes she deserves. Unfortunately, her actions hurt the living, undermine the natural order, and threaten the eternal flow of souls between life and death. By the time she understands the damage she’s done, it may be too late to save herself and the souls she has hurt. An Afterlife Fantasy by award winning author Eric Witchey.

In other news, I’ll be at the World Fantasy Convention in San Antonio next weekend with ShadowSpinners Press and a number of the Labyrinth of Souls authors, to promote the game and the fiction series. Work continues on the third Dungeon Solitaire game and Labyrinth of Souls expansion called Dungeon Solitaire: Devils Playground. However, with the end of the year looming, we have pushed the Kickstarter back until after the new year. Progress also continues on the the Labyrinth of Souls mobile app, which is also in development. Stay tuned for more news on all these projects.

In the meantime, enjoy Littlest Death, and check out the other Labyrinth of Souls novels, Benediction Denied by Elizabeth Engstrom, Symphony of Ruin by Christina Lay, and The End of All Things by Matthew Lowes. The next book to come out will be The Door of Tireless Pursuit by Stephen T. Vessels. And more will be more coming out in the coming months. Leave a review if you get a chance, and visit ShadowSpinners Press at the World Fantasy Convention next weekend in San Antonio where all things Labyrinth of Souls will be on display.