The Dungeon Solitaire: Devil’s Playground Kickstarter was launched on February 1st, and reached base funding in under 24 hours! It has since smashed through five stretch goals, and we are well on our way to the sixth. New stretch goals have been announced and new card art by Josephe Vandel has been revealed in a number of updates. And there’s more to come as we move into the middle of the campaign. 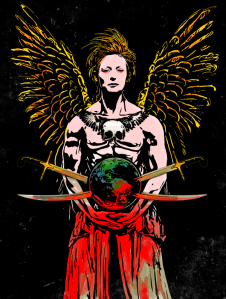 Thanks to all the backers have pledged already, and all our supporters who have shared the Kickstarter with friends and gaming groups, and on their blogs and social media. This kind of word of mouth really makes a huge difference!

I am super excited about all the content we’ll be including in the game, and looking forward to hitting more of our stretch goals! Support the Kickstarter now, and help us get there.

If you haven’t check out the dungeon-delving fantasy card game that is Dungeon Solitaire, the original game, Tomb of Four Kings, is available for free, and is playable with a standard deck of playing cards. The greatly expanded tarot game, Dungeon Solitaire: Labyrinth of Souls, launched with a hugely successful Kickstarter in 2015. The rulebook is available in print on Amazon and other online book retailers, and in PDF through DriveThruRPG, and custom tarot cards are available through Gamecrafter.

I am more excited than ever that Dungeon Solitaire: Devil’s Playground is now in the works, once again expanding the labyrinth into the uncharted realms of the imagination. We’re going to deliver another great game!