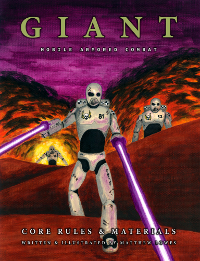 GIANT in now available as a free download, ready for hours of print-and-play giant robot battles and skirmishes. This is an updated revised version, with a few errors corrected. Here’s the back-cover copy:

“Future wars are waged with huge humanoid machines known as giants. Human pilots are encased in neuro-conductive capsules behind layers of armor plating, their senses and nerve impulses merged with the artificial systems of the giants they control.

“Giant is a wargame played with paper, pencils, and six-sided dice. Inside is a complete game, including rules, a visual reference, a record sheet, a master battle map, and eight ready to play maps with various terrain. It’s perfect for travel or when you want an action packed game with minimal preparation.

“Each player controls up to three giants, chosen from fifteen different types. Arm them with missiles, guns, and lasers. Then send them into the battle!” 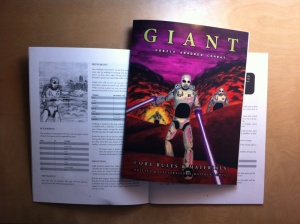 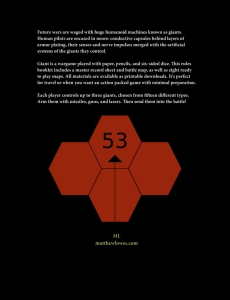 I designed this game back in 2015. I wanted to make a giant robot wargame that was simple enough to be quickly learned and played with nothing more than pencils, paper, and dice. It had to have just the right amount of complexity to provide strategic and tactical challenges, narrative excitement, and the promise of endless possibilities. Finally, it had to generate interesting, vivid, action-packed battles! During a year of development, writing, and play testing, Giant stayed true to that vision. I drew a bunch of illustrations, wrote some flavor text, and did a traditional acrylic painting for the cover. The final 20 page rulebook includes everything you need except dice and a pencil.

You can still support this game and others by purchasing a print copy of Giant from LULU with a glossy saddle-stitched cover for $4.99. Or purchase any of my other games, post reviews, or make a donation here. Your support is greatly appreciated!

Download the free rules, stand-alone record sheets, blank maps, and a print-and-play map pack below or on the games page.

Here are some examples of finished games (click for larger images): 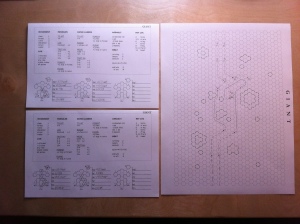 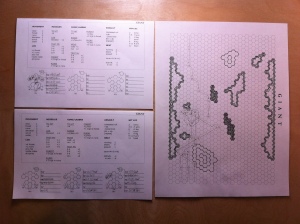 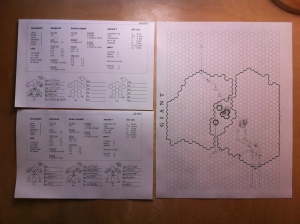 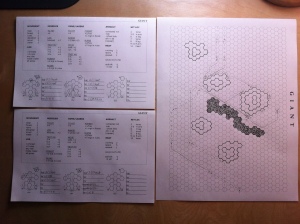