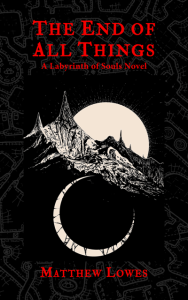 I’m very excited to announce that the third Labyrinth of Souls novel, The End of All Things by Matthew Lowes (me), has been released and is available now on Amazon and other online book retailers. When I designed Dungeon Solitaire I had no idea it would lead to a series of stand-alone novels, and I am super excited to be in the lineup with so many other writers I admire. The End of All Things is a delve into the mythic underworld of a post-apocalyptic future. There’s plenty of action, adventure, and incredible discoveries to find within the dark depths of the labyrinth.

Here’s the blurb from the back cover …

Rithik is a hunter of artifacts among the ancient cities of a long-gone, advanced civilization. Infected with ghost flesh, a fatal disease caught in the ruins, he is banished from his village and must find his way in the wastelands. With the help of a mutant dog, he ventures into the post-apocalyptic underworld in search of the answers to life and death. In the dark forgotten depths, they discover extraordinary secrets and terrible dangers hidden by the catastrophic downfall of ages past. And in the farthest reaches of the labyrinth, Rithik must face the greatest enigma of all—himself.

In other news, work continues on the third Dungeon Solitaire game and Labyrinth of Souls expansion called Dungeon Solitaire: Devils Playground. I had been hoping to launch a Kickstarter this month. However, I’ve been really focused on getting this novel ready for publication, and I am not quite ready for a Kickstarter launch. Stayed tuned for more details on when Devil’s Playground will launch, and for updates on the Labyrinth of Souls computer game and mobile app, which is also in development.

In the meantime, enjoy The End of All Things, and check out the other Labyrinth of Souls novels, Benediction Denied by Elizabeth Engstrom and Symphony of Ruin by Christina Lay. There will be more coming out in the coming months. Leave a review if you get a chance, and visit ShadowSpinners Press at the World Fantasy Convention this November in San Antonio where all things Labyrinth of Souls will be on display.

*I’ve also consolidated all things Labyrinth of Souls onto a single page where you can learn about the various games, all the novels, and new developments. Here can check it out here.